Peter Saville is a graphic designer who has designed many record sleeves for Factory Records artists. He has his own website here.

Saville has previously designed the England football strip, been the art director for Dior adverts, and was creative director of the city of Manchester.

The image shown on the cover is from the Cambridge Encyclopedia of Astronomy. It was the first pulsar discovered, and is said to be emanated from Jodrell Bank, close to Manchester where Joy Division are from. Peter Saville himself said it looks ‘tight’, like Stephen Morris’ drumming, but is also fluid like a heartbeat. What I also like about the cover is the fact that the title is not shown. This is likely because it is from the post-punk movement, of which artists did not like the idea of stardom and massive recognition like pop stars were getting. I love how minimal the cover is, with a lot of open space with the main image composed in the centre, giving the album a sense of mystery. The use of colour is also very minimal, using only black and white. The straight lines gives a calm, still effect, but they are met with curved lines in the centre which gives a more moving, dynamic effect. This, along with the contrasting black and white, further give a sense of mystery. 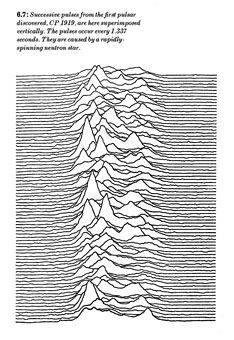 Image from the Cambridge Encyclopedia of Astronomy 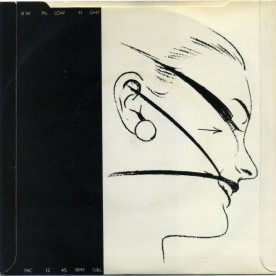 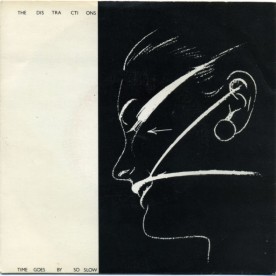 Time Goes by so Slow by The Distractions, designed by Peter Saville

The Distractions are a punk rock band from Manchester. They were mainly active 1975–1981. This is one of my favourites from Peter Saville, as the simplicity, contrast, and typography really stand out. Looking at the cover from the front, over half of it is black and the rest is a white/cream colour. Straight away this suggests something odd about the cover, as it is not split 50/50 like you would expect. It also looks like there is a woman’s face carved unto the black section. It looks as through it is scratched into the black section because her face is the same white/cream colour, and has very rough edges. This gives the cover unusual depth, as I imagine the black covering the white section. The typography used is capitalised and thin. The lettering is also spaced out unusually with large gaps, and composed in the top and bottom left hand side of the cover. Overall it gives the cover an almost eerie feel, as in everything feels like it is off. This may be a reflection of the punk rock movement, where artists wanted to be different and stand out.